United States of Moving: Which States Americans are Moving To and From

Moving is a part of life and for many Americans, it’s something they do somewhat often. According to the U.S. Census Bureau, around 1 in 10 people move every year. Maybe they want a change of scenery, or they’re looking to build a home – whatever the reason for moving, we want to know where in the U.S. Americans are heading and where they’re leaving.

Here at CraftJack, we analyzed Census Bureau data to find the states Americans are moving to and from the most across the country. We also conducted a survey of more than 1,000 people to learn more about the reasons behind their moves.

There are many reasons someone may move, but the lack of winter may be the biggest motivation behind a move. It’s clear many people are heading further South, where temps (and winters) are historically better. The top states people are moving to include Florida, Texas, Arizona, North Carolina, and South Carolina. Rounding out the top 10 includes Tennessee, Georgia, Idaho, Utah, and Nevada.

When it comes to the states Americans are leaving, the top three are home to the most populated cities in the U.S. The number one state people are leaving is California, followed by New York, and Illinois. Massachusetts, New Jersey, Louisiana, Maryland, Hawaii, Minnesota, and Michigan round out the top 10 states people are saying goodbye to.

Among regions, the South is seeing the greatest increase in migration, while the Northeast is losing the most people. 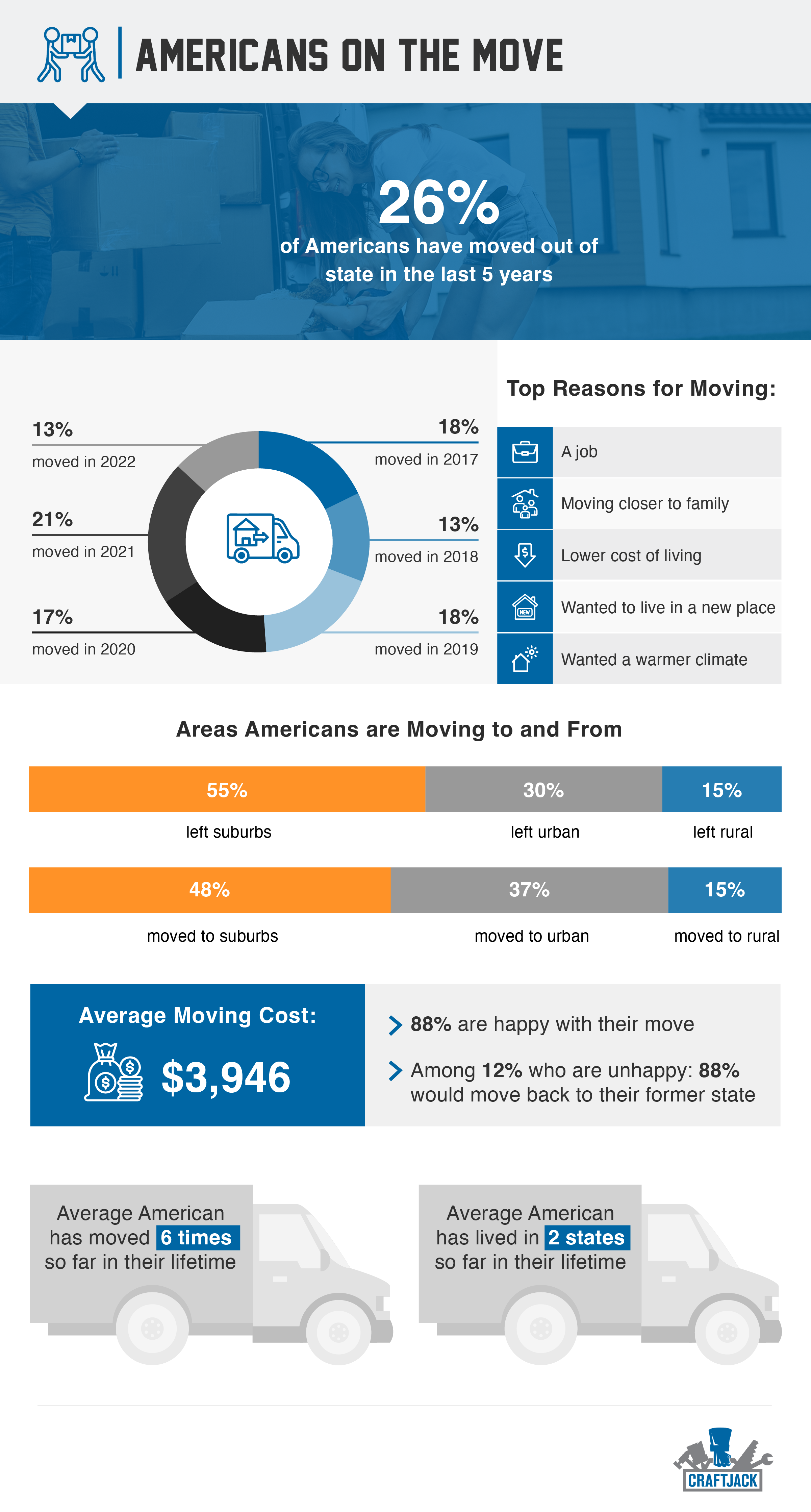 Overall, most people (88%) are happy with their move. Among the 12% who are not, 88% say they would move back to their former state. Moving again wouldn’t be unlikely, as the average American reports moving six times and living in two different states. 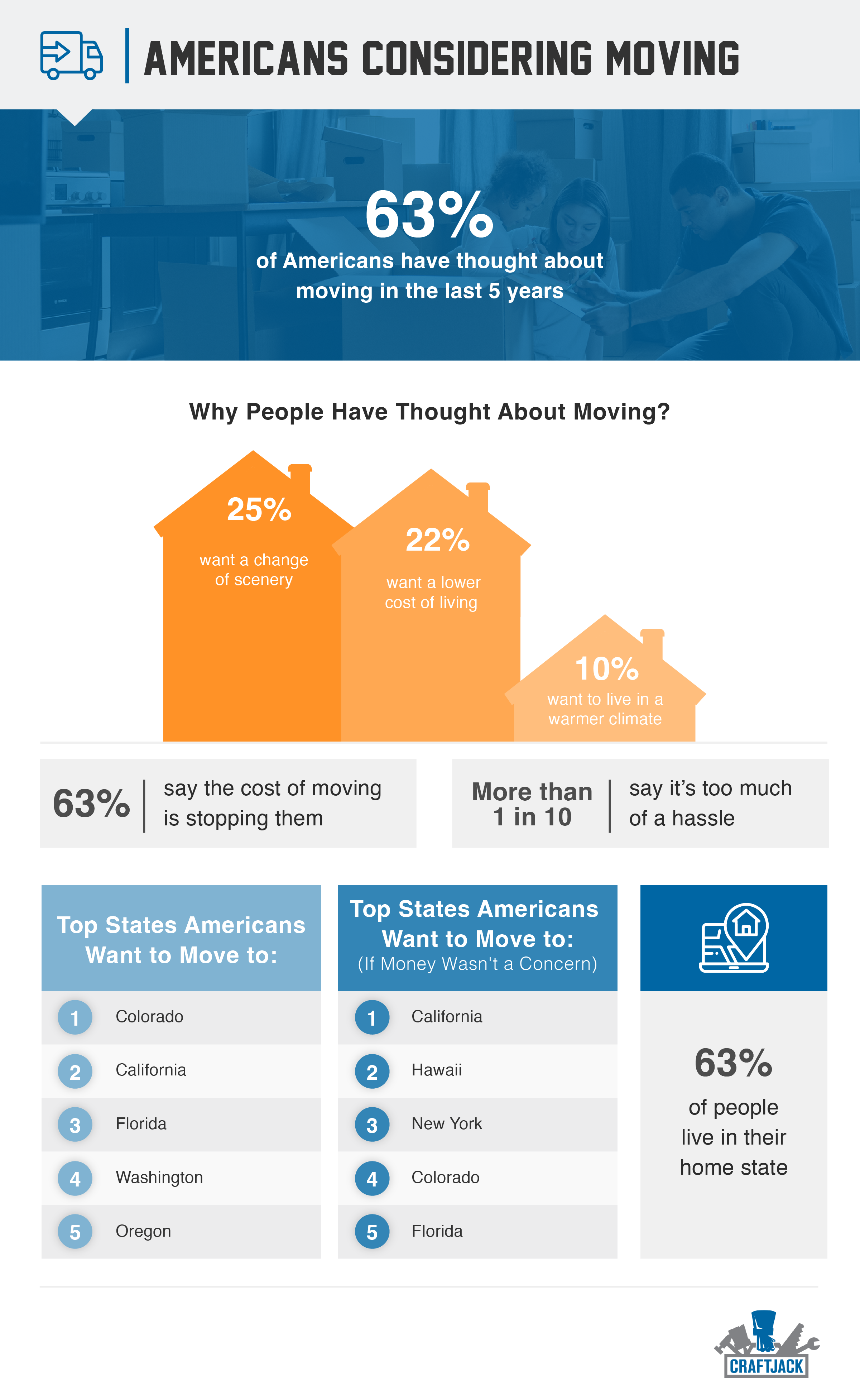 Although not everyone has moved in the last five years, 63% of Americans say they’ve thought about it. The top reasons why people are considering moving include wanting a change of scenery (25%), wanting a lower cost of living (22%), and wanting to live in a warmer climate (10%).

The majority of people (63%) say the cost of moving is what’s stopping them from actually doing it and more than 1 in 10 say it’s just too much of a hassle. The top states people report wanting to move to include Colorado, California, Florida, Washington, and Oregon. If money wasn’t a concern, the most desired states to live in are California, Hawaii, New York, Colorado, and Florida.

Many people don’t move far from where they were raised with 63% of people currently living in the state where they grew up. Whether you’re in your home state or not, you can always make your home feel welcoming by decorating it as best you can. Whether it’s with DIY home projects or just baking a favorite family dish, remember home is where the heart is!

In September 2022, we surveyed 1,058 Americans to learn more about their moving habits. Respondents were 48% male, 48% female, and 4% transgender/non-binary. The average age of respondents was 38.

When using this data and research, please attribute by linking to this study and citing CraftJack (craftjack.com)