Study Reveals The State Of Home Offices In 2021

If you’re still working from home, now nearly 18 months into the pandemic, you’ve got no excuse—at this point, you should have put together a proper workspace or home office (or found a professional contractor who can help).

Certainly, many people have limitations in terms of space, but much can be done with little, and you don’t necessarily need to break the bank to look professional in the Zoom Age. By now, at bare minimum, remote workers should have a dedicated, functional space that supports their bodies, appropriate accessories to look and sound professional on video calls, and something other than a blank wall in their background.

For the most part, people are getting their act together, pulling their cats off their laptops, rejecting the kitchen counter as a “desk,” and learning the essentials of lighting. But many more are still several home improvement projects away from being in a place of comfort, productivity and professionalism.

We recently surveyed 1,520 Americans who have been working remotely during the pandemic to understand their experiences in improvised workspaces, their attitudes towards presentation on video calls, and the consequences of their bad habits.

Investing In Your Home Office

We began by asking about time and money invested in home workspaces. Great news: 91 percent of people have done something to improve their workspace over the past year, and 90 percent have spent money as part of that process.

More than half of those we surveyed have invested in a new chair, and one in four have gotten a webcam. Also of note, 58 percent of respondents said their employer has chipped in either with money or supplies to support the development of their home workspace. 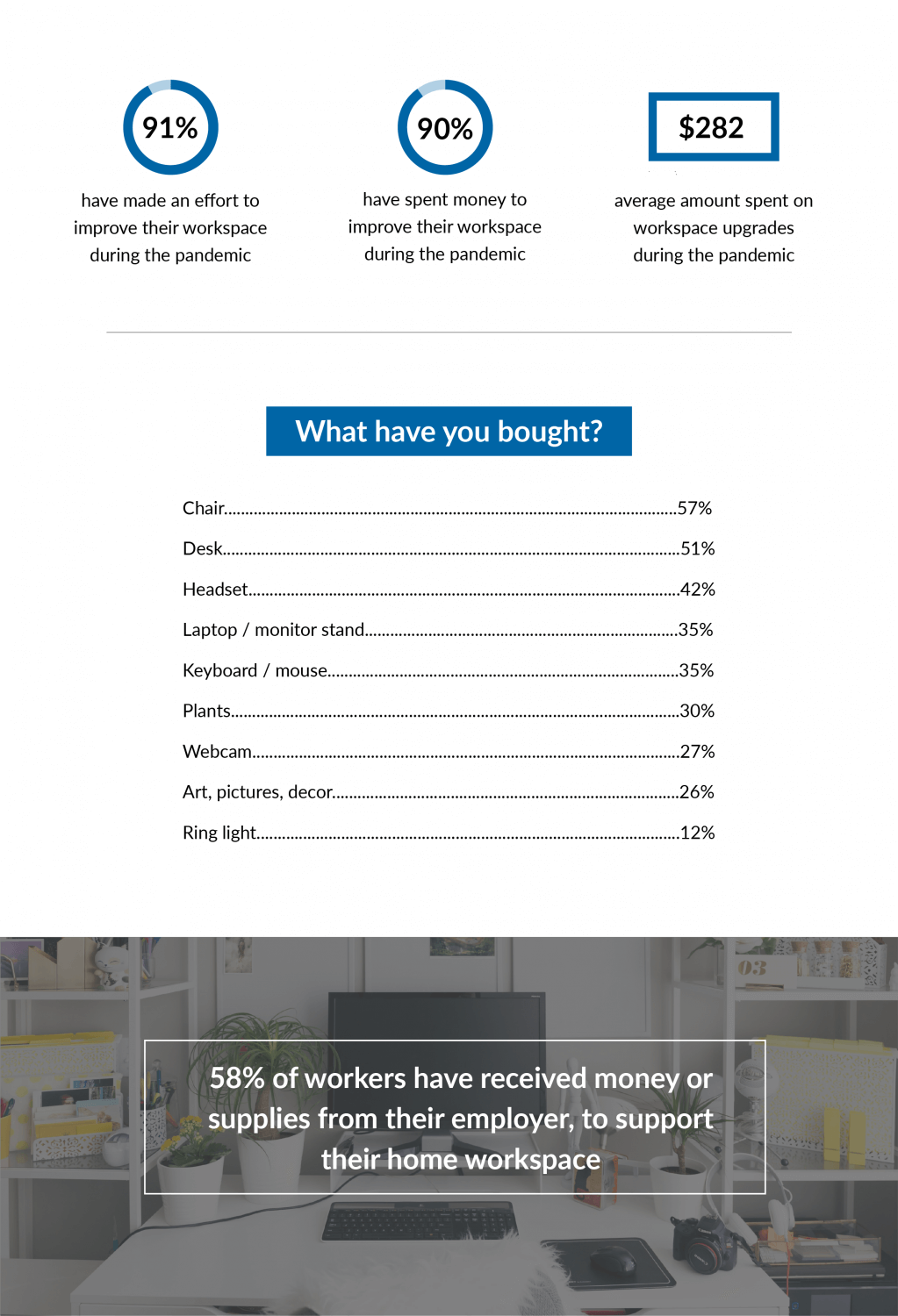 Next, we asked where people are actually sitting and working. Not everyone has the luxury of a dedicated home office, and even when they do, it often needs to be shared with partners and children. Seventy-one percent of the people we surveyed said they are “improvising” with respect to their workspace. One in three (32 percent) said they work from a proper office, but nearly as many (31 percent) say their bedroom is their office. Yikes!

Without question, this is a world that would be unrecognizable to most professionals even a decade ago. 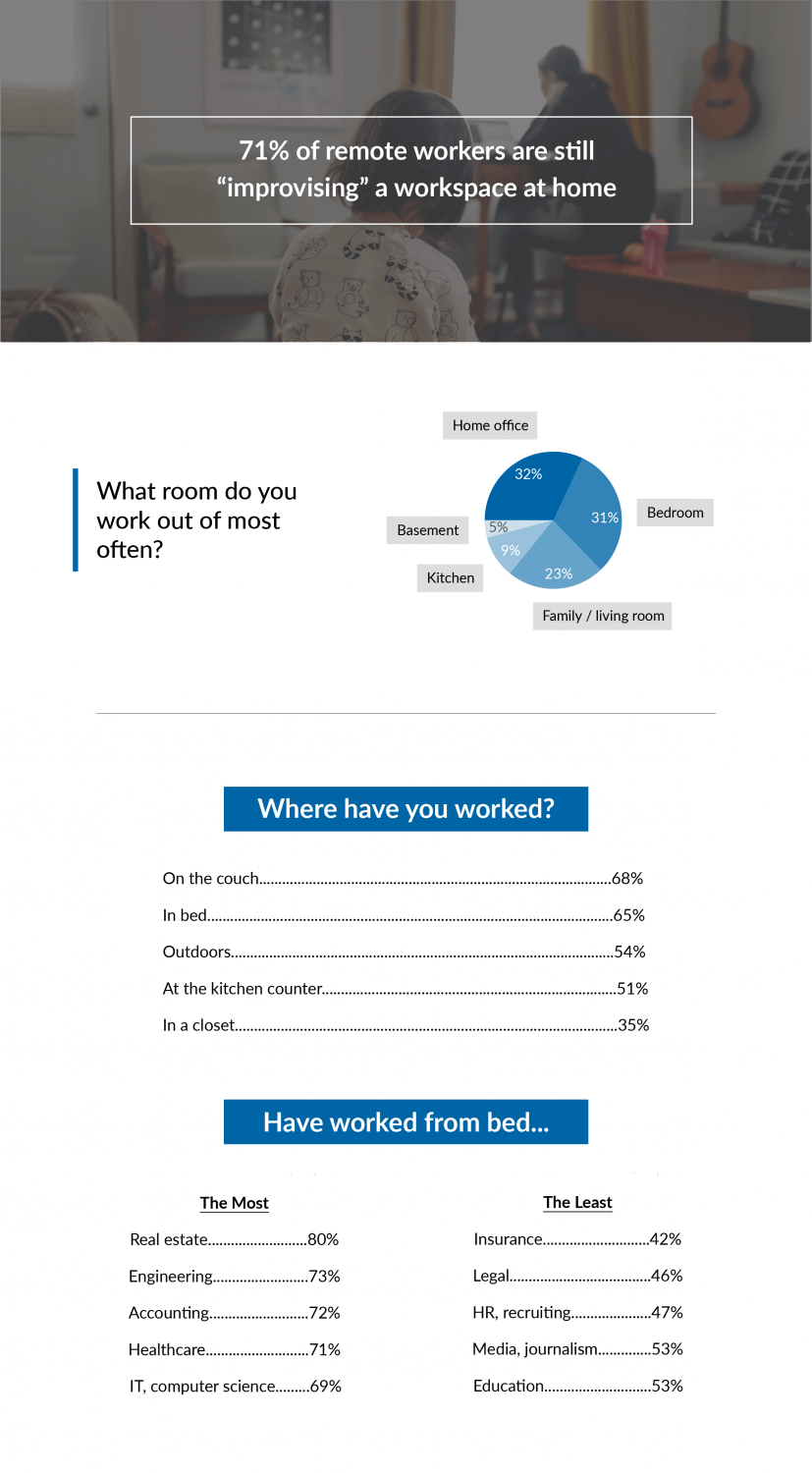 The Painful Truth About Working From Home

What price have we paid for all the improvised working in odd places and positions? A whole lot of physical pain. Seventy-four percent of people we surveyed said they’ve experienced pain and discomfort while working from home, 81 percent experience it at least weekly and 51 percent experience it most days or every day. Most pain is felt in the back (56 percent), neck (54 percent), and shoulders (43 percent), but nearly one in three people (31 percent) experience hand and wrist pain as well.

Two out of three workers we surveyed (64 percent) say their body is less supported at home than it was at their office before the pandemic, 78 percent say they would use a more supportive chair if their employer paid for it, and 50 percent of remote workers say the physical pain of working at home is enough to make them long for a return to the office. 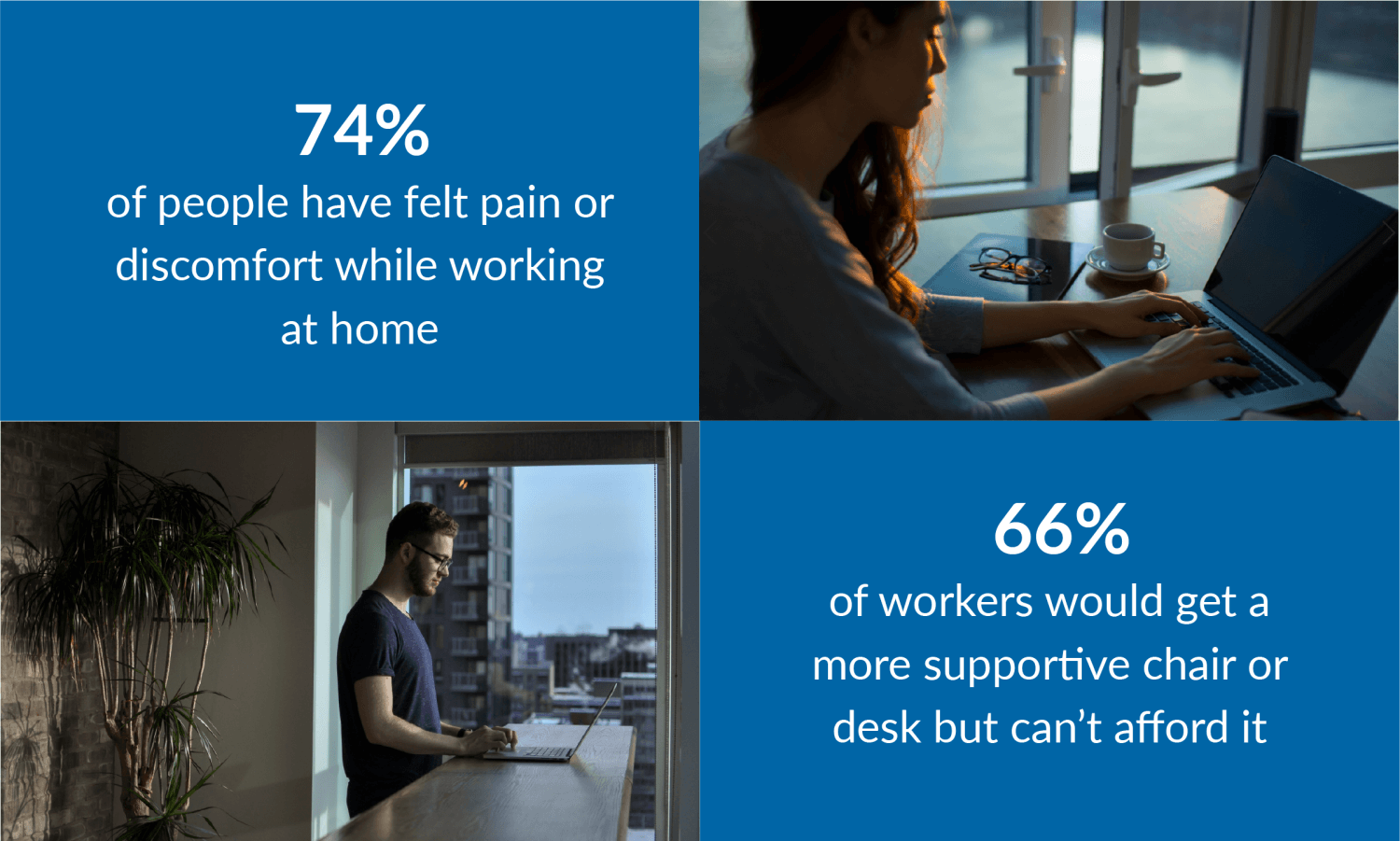 With so much of remote work centering around video calls, we asked several questions about this very modern phenomenon, the accessories it requires, the wide-ranging quality of backgrounds most of us see, and of course, infamous uninvited guests like pets and children.

Sixty-four percent of those we surveyed have made an effort to curate their background in some way, most commonly by people working in HR, recruiting, and accounting. Those working remotely in legal, insurance, nonprofits, and social services made the least effort in this area.

Sixty-three percent of people have spent money to improve how they look on calls, on average spending $195. This can include everything from a nicer webcam to a ring light to houseplants or wall art to spruce up what’s seen in the frame. In addition to spending money, 47 percent take advantage of the free option to “touch-up” their appearance on Zoom and other leading video conferencing platforms.

Not surprisingly—based on what we know from earlier in the survey—the bedroom is the number one place for people to take video calls (29 percent), followed closely by the home office (28 percent), and family or living room (27 percent). Sixty-eight percent of people said the appearance of their background is very important to them. Unfortunately, what’s being displayed in the frame doesn’t back that up: one in three sit in front of a blank wall, the second most common video call background reported.

When choosing a virtual background, one in four go with a custom image, while Zoom’s templated options dominate in popularity after that. People like the “Grass” background best, followed by “Earth” and the “Golden Gate Bridge.” 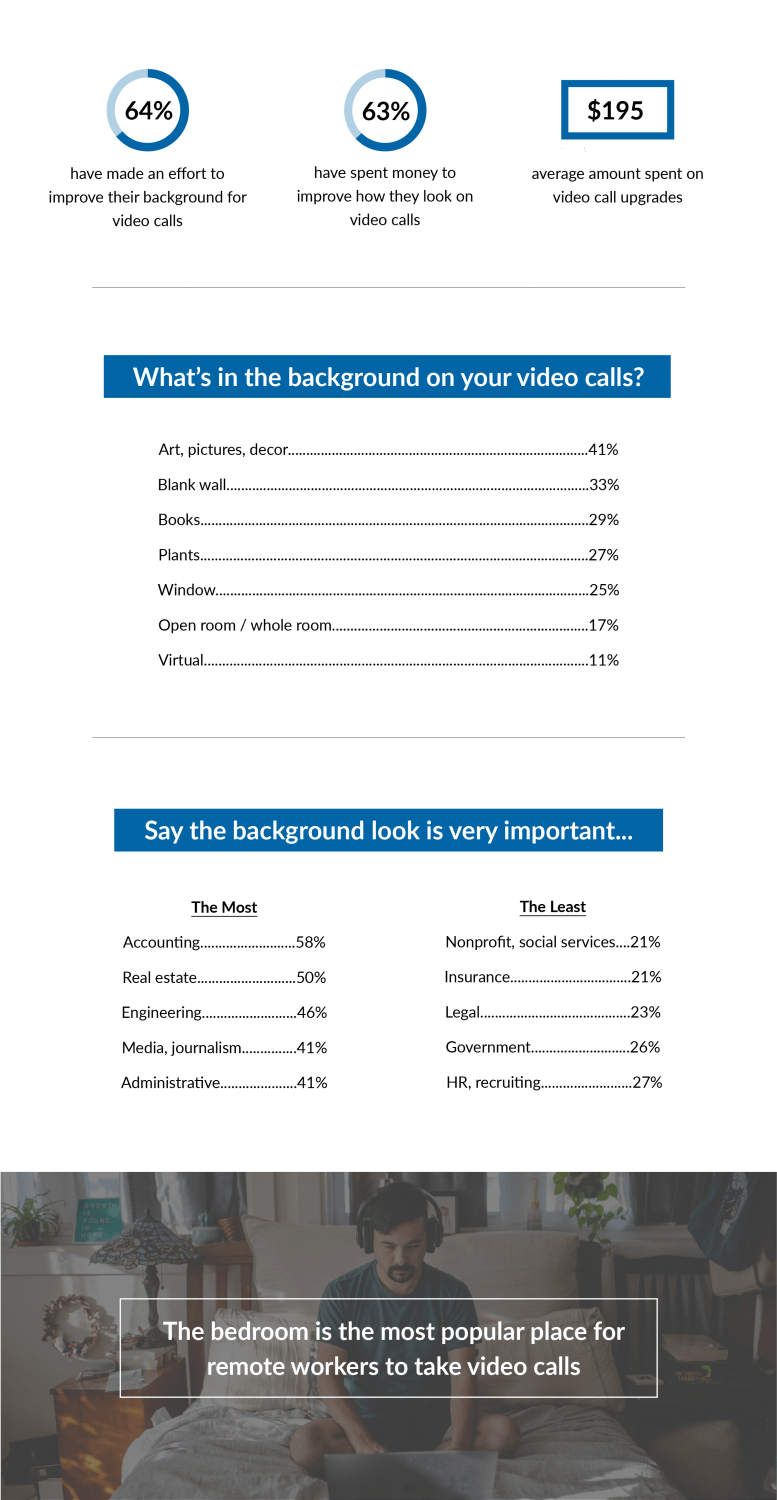 Remote workers, isolated as they may be, are generally not going it alone. Many of the people we surveyed live with another person who also works remotely, and one in three of those people (37 percent) work in the same room as the other person. Unsurprisingly, 69 percent say they are regularly disrupted by the other person’s noise, and of those who work remotely with a partner or spouse, 58 percent say the experience has at some point strained their relationship.

We also asked about uninvited guests interrupting video calls. Two in three people (69 percent) have had either a partner, child, or pet unexpectedly show up on-screen during a video call, with pets being the most common culprits (43 percent), followed by children (37 percent) and partners (34 percent). 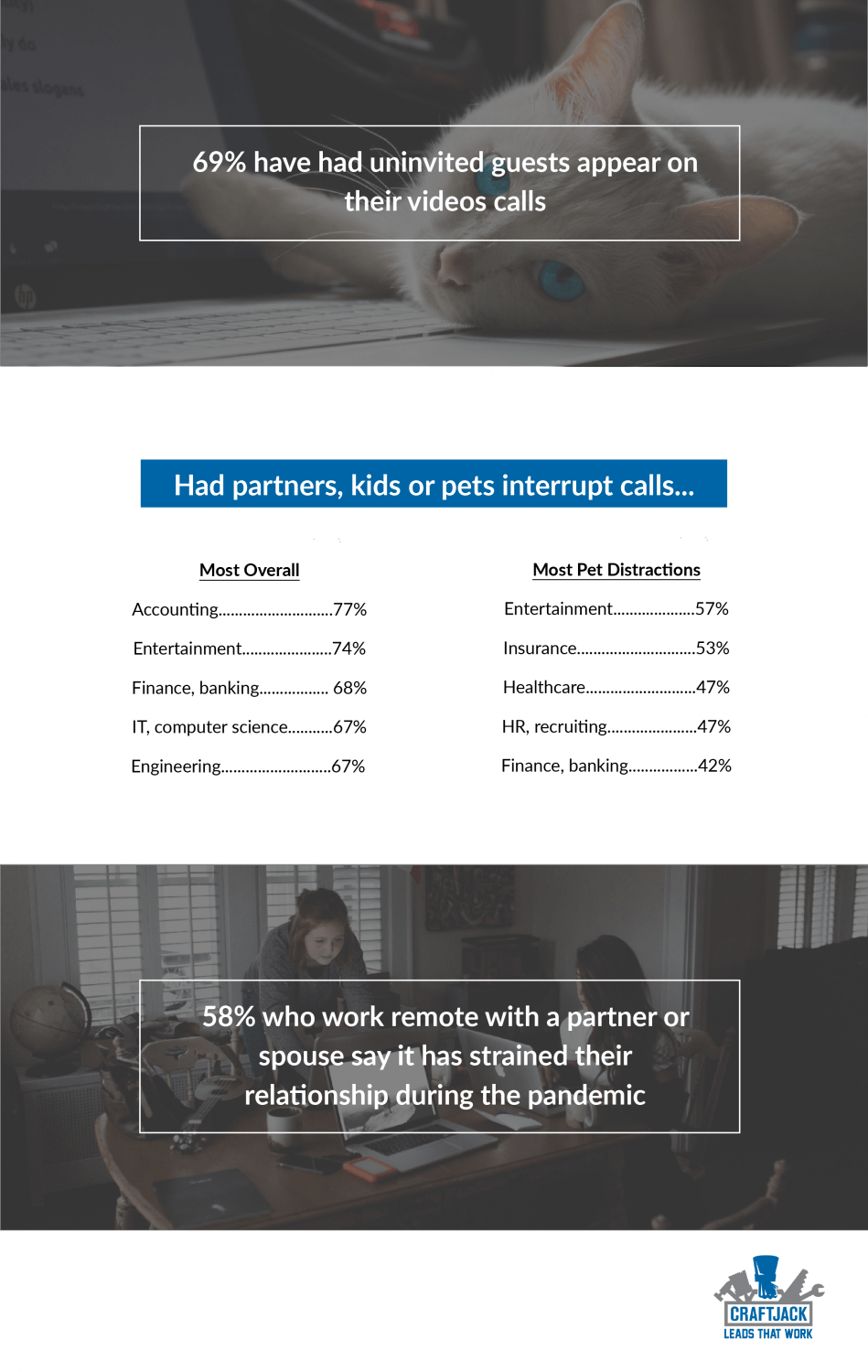 While many formerly office-bound workers will indeed return to offices, many more will remain either fully or partially remote. Trends suggest a hybrid approach will become the new normal, with workers spending some time in the office but more at home than was typical before the pandemic. As a result, home offices will only get more seriously equipped.

Feel free to use this data and research with proper attribution linking to this study. When you do, please give credit and link to craftjack.com 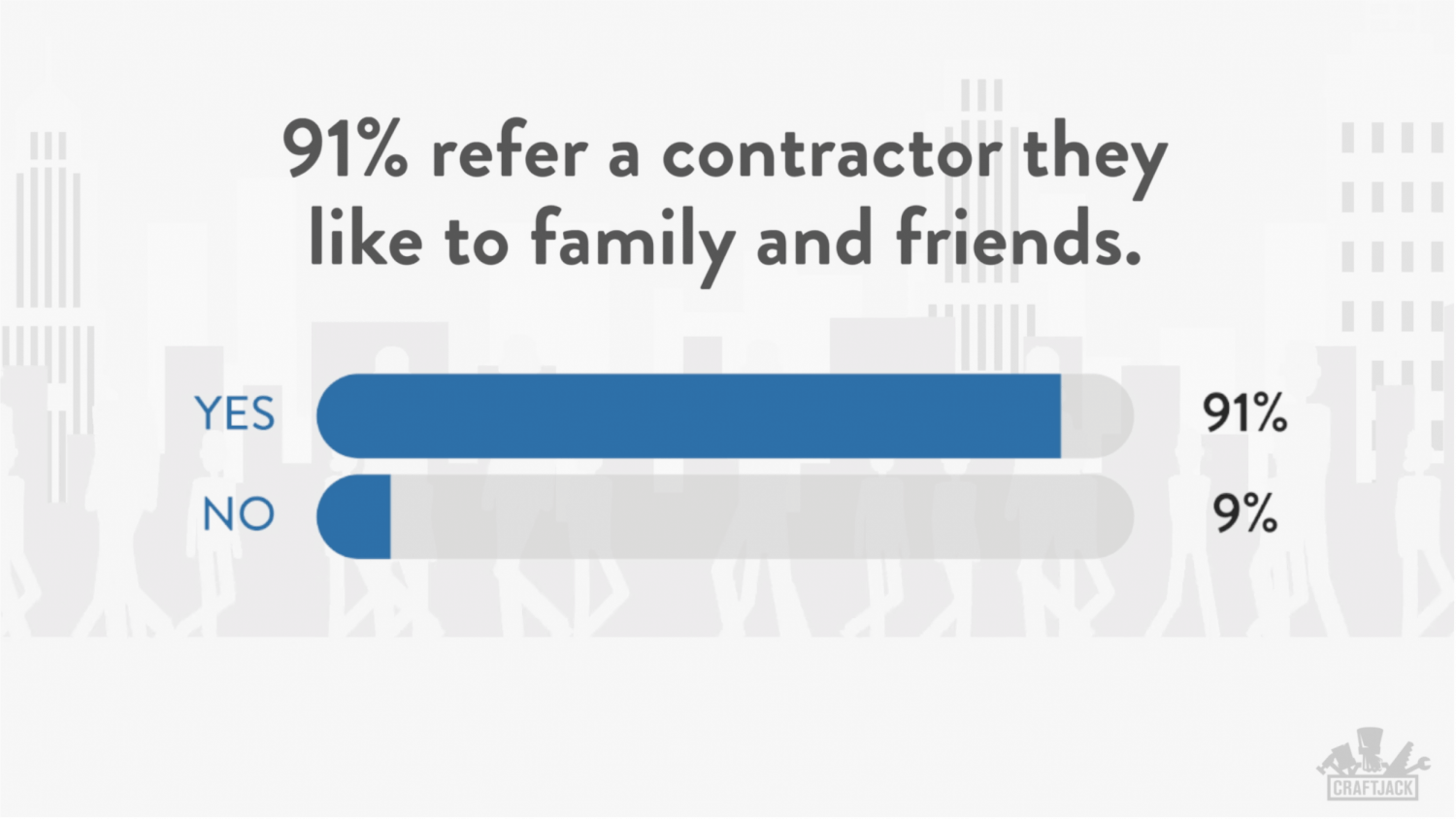 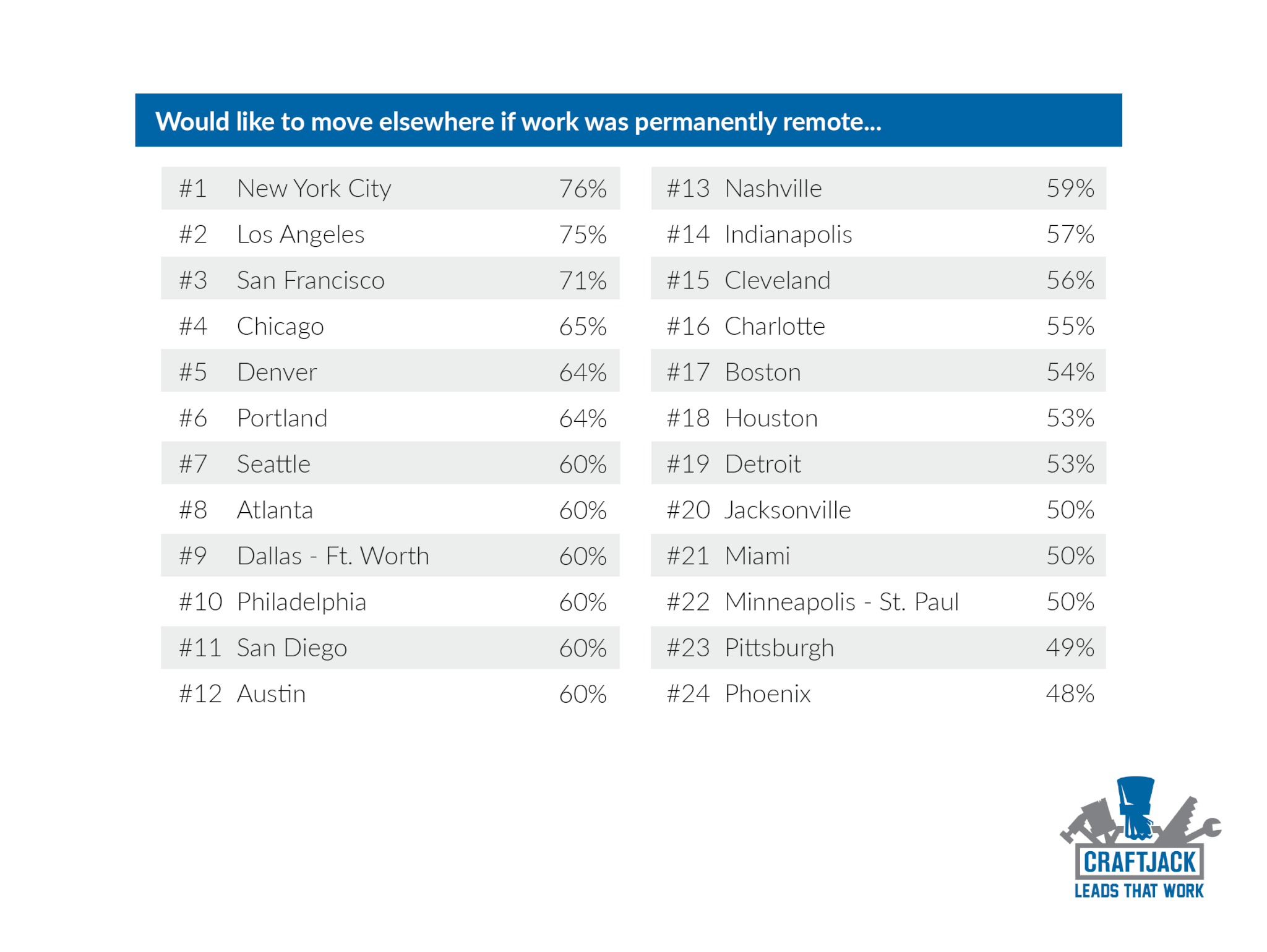 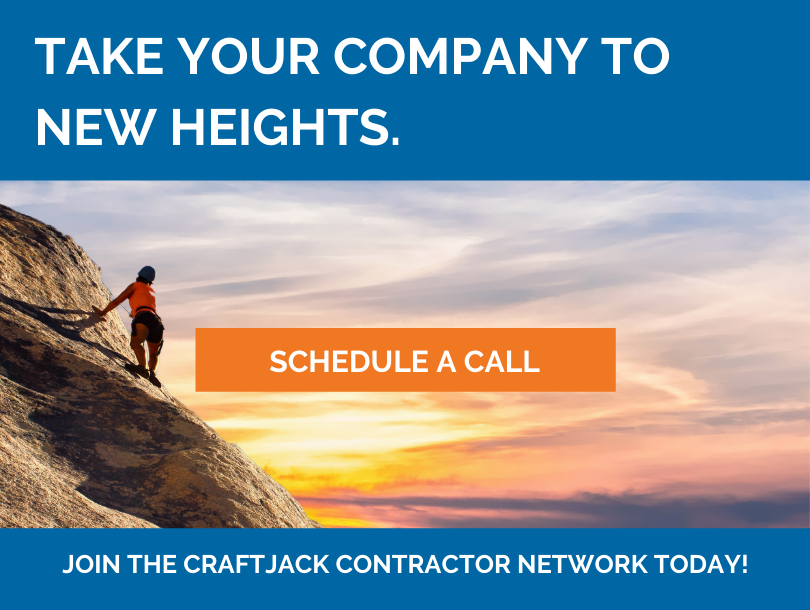